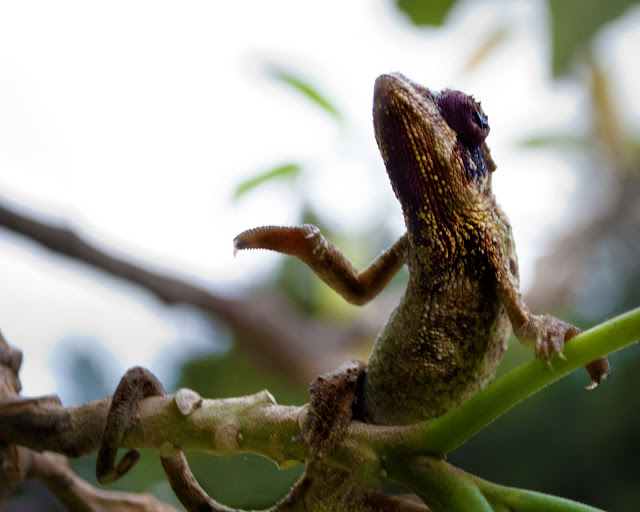 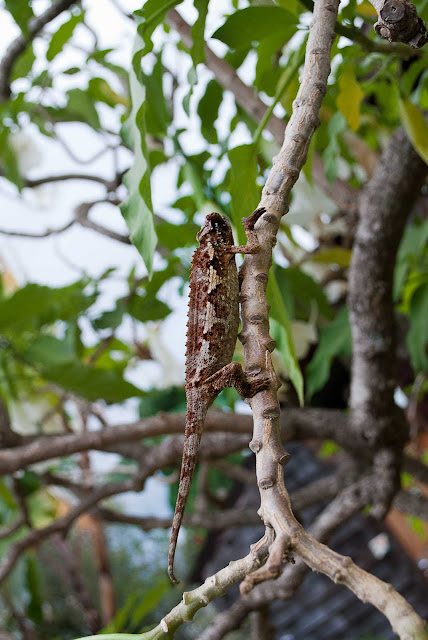 While we were ‘Up Country’ we were on the lookout for a Jackson’s Chameleon and as impossible as it seemed, our friend Lyle found one in a tree – you could hardly see it as it looked just like the branches it was sitting on. This is a female – the male has three horns on its nose and the one we saw last year was iridescent green! but alas there was not one in sight that day.

In 1972, the Jackson’s Chameleon (Chamaeloeo jacksonii) was introduced to the Hawaiian Islands from its native land of Kenya and Tanzania. In the last 30 + years, these species have multiplied and formed a large breeding population on Oahu, Maui, Kauai, and Hawaii. In particular they can be found on the Koolau range, Oahu. Their abundance may be underestimated based on the fact that these chameleon’s are difficult to see unless you happen to look right at one.

Chameleons in general are amazing creatures. They have independently focusing eyes that allow them to see 360 degrees. Their tongue is 1.5 times the length of its body and has a type of suction cup on the end that allows them to snatch up prey. Individuals are highly territorial and live solitary lives, defending their home turf. Males have three long horns, while females do not. And, of course, as is so well known, chameleons can change the color of their skin if frightened. “Chameleons in Hawaii”