A hilarious look at what really happens in a barnyard when the farmer’s back is turned. “Barnyard” is a lighthearted tale centering around Otis, a carefree party cow, who enjoys singing, dancing and playing tricks on humans. Unlike his father Ben, the respected patriarch of the farm, and Miles, the wise old mule Otis is unconcerned about keeping the animals’ humanlike talents a secret. But when suddenly put in the position of responsibility, the “udderly” irresponsible cow finds the courage to be a leader.

Hmmm, how obvious is it that I don’t see a lot of movies . . . oh well, this was fun! I took these photos on a photo excursion I took last year and have been dying to use them. I have to say I felt a little bit intimidated by these animals. Even though there was a fence between us I stayed back and zoomed in as much as I could. Is anyone else afraid of cows?

My recipe for the textures: 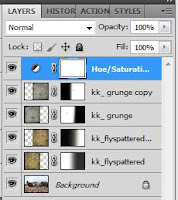 I created layer masks to blend the textures to fit the shape of the photo and used different blending modes on each layer to achieve the effect I wanted. I also used a hue/sat adjustment to tone down the whole thing. Frame by Katie Pertiet.