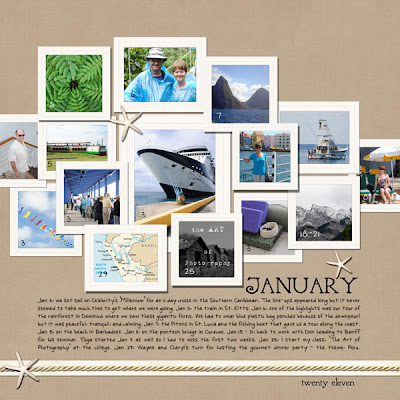 Yes, January isn’t over yet but I needed to create a layout as part of my duties as a Creative Team Member at Digital Scrapper. We are having a fun challenge called “Project 12” where we are making a layout that recaps each month. I have the pleasurable duty of being the cheerleader for this project so I needed to get a layout finished and up in the gallery. I didn’t have trouble finding photos because I only took about 628 while on our cruise!! I kid you not . . . then I filled in the last four with things that are scheduled for the next two weeks. I spent HOURS creating this but now I’m set for the next eleven months because I’m going to use the same template each month. I have visions of February and Valentine photos dancing in my head . . .
TOOT – this layout has been featured on the Digital Scrapbook Artisan Guild homepage!