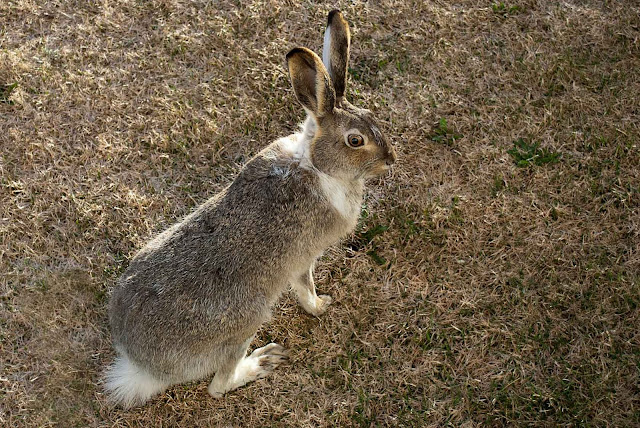 I get such a kick out of our rabbits running around here in the city! All winter I was trying to get a photo of one with his white coat, but to no avail. The other night this fella was sitting right under our kitchen/dining room window and I had to settle for brown.

A few interesting notes I found at ‘Talk about Wild life’.

White-tailed Jackrabbits are hares of the open spaces, avoiding heavy woods. With prominent eyes high on their head, they have almost 360 degree vision, allowing them to see most approaching enemies. During the day they rest in a shallow sheltered ‘form’, often under some standing vegetation, green or dried, such as Alfalfa or weedy plants. Should a hungry Coyote approach, they bound away on leaps of 5.5 to 6 metres, at speeds of 64 kms per hour, sustaining that pace for a kilometre or more. Generally, they circle back to the starting point. Coyotes, which often hunt in pairs, know this habit, so while one is actively pursuing, the other stays behind to lie in ambush near the starting point. Hares at one time were classified as Rodents, mainly because of their similar front incisors. A major difference is the pair of dowel-shaped teeth immediately behind those chisel-sharp front teeth. As a result, they have been placed in an order of their own, the Lagomorphs. They are totally vegetarians. All members of this group re-ingest their fecal material, running it through their digestive tract a second time to absorb nutrients which were broken down after the point of extraction the first time. (eeeewwww!)