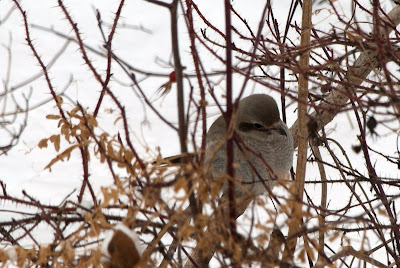 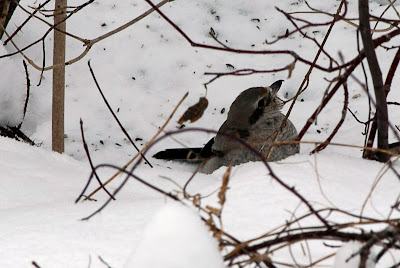 We spied a Northern Shrike this morning sitting patiently near our bird feeder. Most likely watching for mice but also keeping an eye on the chickadees that flitted nervously about!
“Northern Shrikes pass southward through Alberta in October and return in late March and April. The Northern Shrikes macabre habit of impaling its kills on thorns and barbs has earned it the name ‘butcher bird’. Lanius is Latin for ‘butcher’ and exubitor is Latin for ‘watchman’ or ‘sentinel’, therefore ‘watchful butcher’ is an appropriate description of the Northern Shrike’s foraging behavior. (Birds of Alberta, Lone Pine Field Guide)