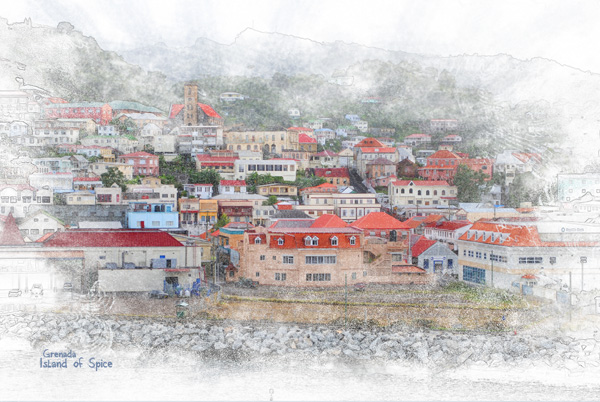 We visited this beautiful island in January of 2010 and I took this photo from the cruise ship as we were leaving. Grenada is known for its spices: nutmeg, mace, cloves, bay leaves, cotton, cinnamon. We toured a spice farm and went to Annandale Falls. It was quite the experience riding a bus on narrow, winding, (I’d say treacherous) roads. Everyone, everywhere you went, was looking for a tip. It could have been overwhelming but we just accepted that this is Grenada. It is a very poor country and the last hurricane, Ivan, destroyed almost 90% of their spice farms. So many people were in dire straights – we didn’t begrudge them their tips.

I chose this photo as the subject of a tutorial I took at Digital Scrapper.